Well for those that just love a big Mack, this should get you salivating profusely. Fresh from the man himself Blake Gilmore, now known as Happy Gilmore, these images are enough to send the blue-water boys into panic. Blake quoted, ‘I have never had fishing like it in my life. It was the most insane day out there…Everywhere we looked there were birds diving, mackies jumping and manta rays going nuts. Got a 5kg Mack Tuna on the Stradic 1000 with 10lb braid…Best fun ever’. And…’Smashed the mackies on Sunday, threw a ton back and got more tuna than I have ever seen’.

Need I say more? The Pelagic activity is now there for the taking. Keep an eye on the wind and plan your trip to suit the quiet times. So many options, so little time! Lee Point’s Mack Attack, Bottlewasher, Angler’s Reef and Rick Mills….Dundee’s Long Lost, Loee Patches, Roche Reef all the way to Sail City and beyond you are bound to find surface activity of some sort.

While I’m on a roll, you might’ve thought the barramundi were dead and buried for the dry but alas, a few are now poking up for the taking. Glenn Dinwoodie from Top End Barra Series has broken the drought on a number of fish to 85cm from The Daly, Shoal Bay and Darwin Harbour and it appears by his purchases that at least some credit must again be given to those damn Berkley 5” Gulps.

Crabs, crabs, crabs…..everyone should be getting Crabs. No offense but they seem to be everywhere, big too! 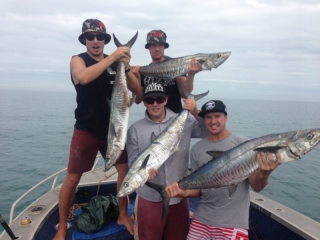