I think the Bluewater Season is set to be a cracker. The reports so far have echoed Sailfish in large numbers, the odd Marlin including a monster landed off Dundee last week, Red Emporer, Goldies, Trout and Jewfish to name a few. The Jewfish have been big buggers too….up to 18kg I am told! If we could gather any positive from a poor wet season, it might be that the reef species have come in a lot closer than previous….that being that really good sized Golden Snapper, Jew and even Coral Trout have shown up in Darwin Harbour and in around the inshore reefs about Dundee and Bynoe.  As a general rule, previously you had to do the miles to find the big ones but I’m being told time and time again that it isn’t the case this year.

Talking Jewfish, Saltwater Arm has been a ripper with fish coming on shallow reef sections as a bi-catch while trolling for barra and Channel Island’s Town Hall Hole has played host to busting 100lb handlines on big Jew and the occasional heavy shark.

Keep an eye on the weather reports. I’ve noticed the early morning quite calm and the early afternoon starting to get ugly so may be best to go early and keep it short and sweet.

Crabs….game on really. Shoal Bay, West Arm, Middle Arm and Saltwater Arm is all go on the bigger tides.

Barra-wise, the inland billabongs are holding up water temps well and some nice fish are being caught particularly during the new moon period. Last night I shot to Hardy’s Billabong for a few hours…..84cm was the biggest, taken on a 15A Green Bling Bomber cast around the Pandanus.

The Daly River has proven to be a big tide affair only of late. Wait for the saltwater push and hit the fast trolling straight up the guts for your chance at a metrey.

Bring on the dry season…..I’m yet to feel it arrive! 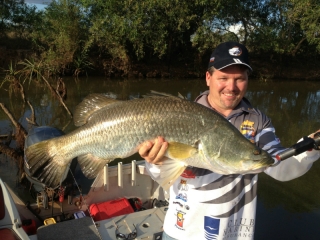