Well that would have to have been one of the best long weekends ever! Weather was damn fine for the Bluewater boys, many returning chuffed with monster Jewfish caught wide of Dundee. Big Parrot fish, Coral Trout, Trickiest and Goldies were amongst the hauls and the sea was mostly like glass. On the Barra front, The Daly went well for some with thick-set 70-80cm fish caught at Clear and Croc Creeks. The odd metrey was reported from The South Alligator river although overall fish numbers weren’t that great. Mud crabs are about now and some are damn stonkers….good numbers came from Saltwater Arm and only two’s and threes from around the harbour region. As we sneak onto the neaps I’d expect Shady to be popular. Watch the higher tides for launching as water levels are a bit sketchy there on the nearer lows. Shoal Bay Rock would also be worth a look folks!! 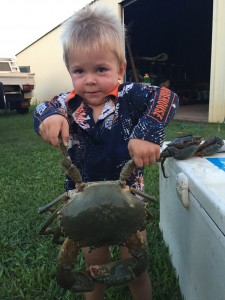