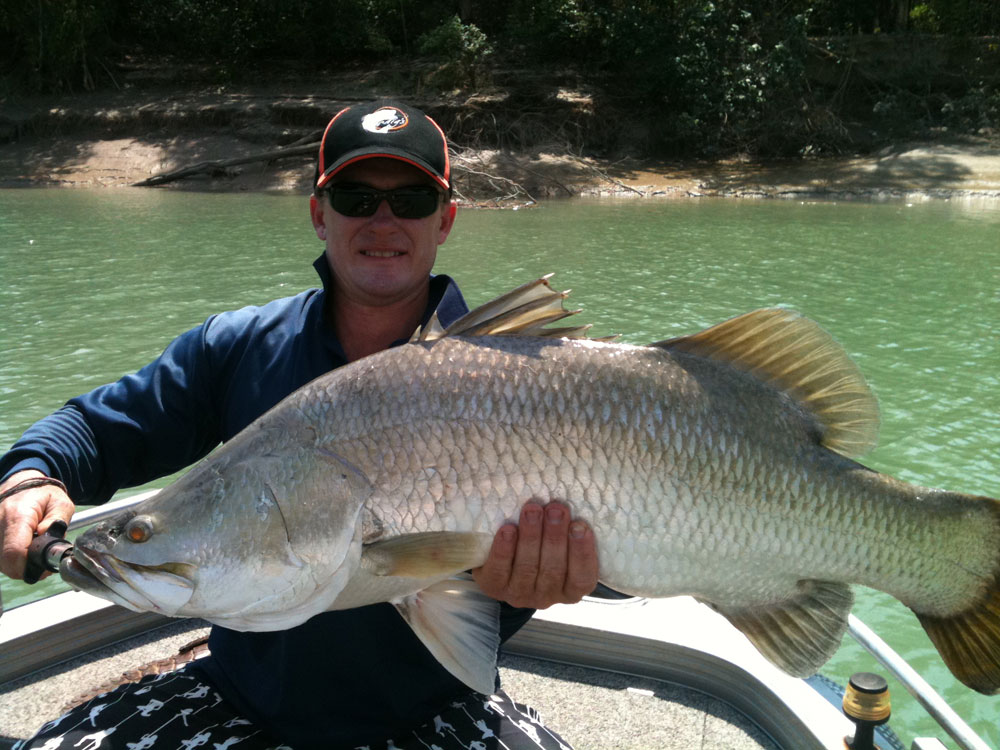 How welcome was the rain on Sunday…..the hot breeze that’s been testing our patience lately was extinguished by a downpour that shocked many of us. It caught a few fisho’s by surprise…some were camping at Four Mile in just Mozzie Domes when the storm hit so rather than try and continue sleeping, they went fishing! The fishing has been real good there too with the two crews claiming a total of around 70 fish caught just by trolling down the middle.

The Canopy Man’s Nick Billias and I hit The Daly on the building tides and had fun with ThreadieBusters amongst the sticks and big 17A Bombers down the guts. The cleanest tidal waters fell between the Esses and Lizzy, so that’s where we stayed. There’s still some big fish about, with two over the metre hooked but not landed (you will need to ask Nick about that one).

Hardies is the pick of the local Billabongs if you’re chasing some size, this year producing plenty of barra in the high 80’s and early 90’s.

The Mackie brigade is slowly but surely thinning out close to town, still the odd decent one about but generally sizes are now shy of 10kg. Some big toothy critters have caused havoc at Fenton Patches with the chances of landing a decent fish to the boat being severely reduced of late. As is often the case, The Vernon region is experiencing similar…. sharks, sharks and more sharks grabbing the easy feed.

Notable Jewfish reports have come from The Narrows at the Adelaide River mouth. Funnily enough, out of the four boats on site at the time, only two were catching them….location, location. The fish were big enough to destroy the good old Ugly Stick (no high-stick of course!) and bust off plenty of braided line.

Just sneaking toward the neaps this weekend….still a bit of run for some fun. Maybe Shoal Bay….what ya reckon?