Hold Onto Your Horses….

What a funny ol’ wet season it’s been. As I sit here about to comment on the lack of rain, it’s bloody pouring…so heavy in fact, I can barely hear the phone ringing! Looking at the BOM website, it looks to me like a healthy flogging might be coming from the West too, so here’s hoping. We now have no choice but to rely on the old saying ‘Better late than Never’.

As I write this, The Daly sits at 2.5 metres above the crossing and every indicator upstream reads either steady or falling. It’s no surprise then, that some notable fish have been caught despite the lacking numbers overall. The Canopy Man’s Nick Billias seems to be turning pro with another metrey to his name, 102cm from ‘somewhere near Moon’. A number of other fish came from the realms of Bamboo and Browns Creek to the tune of 101cm, 103cm and 122cm.

Closer to home, the Adelaide River mouth has fired on a good tide. High 90cm fish are about The Wilshires and nearby haunts, proven fair and square by father and son duo Robin and Marty Burnup’s string of high 90’s for the day. All these big barra were taken on the shallowest version of our latest Pearl Bling Dazzler Classic. Interestingly, the deep divers didn’t raise a scale on the day…so there’s that phenomenon again….big shallow minnows trolled straight up the guts.

Dunno about you, but I’m getting edgy…..Mal, Rob, anyone….can you work this weekend for me? 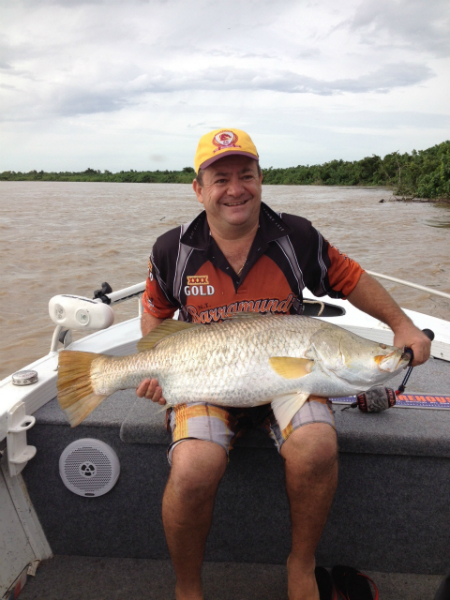