Well the new Zerek Live Shrimps have gone mad this week! These things have been nailing everything from Barra to Salmon, Cod to Goldies, Trevally to Quennies and more. Coming off the neaps was ideal for clarity and a bit of run all in one and these new lures were right on the money amongst the snags in Shoal Bay and twitching off the flats in Middle Arm. Biggest barra report this week went 88cm, from the far end of East Point….now that’s not to be sneezed at!

Those landbased fisho’s shouldn’t be complaining either…..it’s been pretty good from the top side of Shoal Bay all the way around to Dundee thanks to the humidity and subsequent water temps.

By all reports, Hardies Lagoon held the biggest fish during the SWB Challenge last weekend and it was the F18 Classics that were on the menu. Corroboree is also producing decent fish, but perhaps taking a little more effort to fool.

On the bluewater, Mackeral are still about but seem to be shrinking in size?? One crew went wide to Bateman Shoal but said it was tough going, with only a few Trickies about.

This weekend is just coming off the springs onto the neaps with Sunday the first of the small tidal runs for this cycle. Some say no run= no fun, so Saturday could be a happy medium for a reef fishing session. Close by, Rick Mills Reef would be a good choice…both drifting pilchards for Macks on the surface and bottom bouncing for Jew at change of tide providing for all possibilities. …play it safe and leave a spin combo loaded with a chromie in case of a sudden Tuna session.

Of course, the inland billabongs are a good day out without any concern for tides so I guess there aint any excuses!

Posted in Fishing Reports | Comments Off on Zerek Live Shrimps

Here comes the heat and with that comes the barra. It’s starting to hit the straps now with all water temps blazing in the red and the fish are responding well. The harbour flats are bonza with fish to the 75cm mark taking those little Pearl coloured Storm Swim Shads, shallow Bombers and Junior B52’s both on the spring lows and dead neaps. The neaps require the usual quiet approaches up along the mangrove line and sight casting them has been part of the game with such clear conditions.

This weekend will see the annual SWB Corroboree Challenge take place at both Corroboree and Hardys Billabongs on the Mary River system. I’d predict plenty of boats at both locations with a strike of pink clothing to boot! Reports of late have been encouraging but as we see during most comps, excessive boat activity might slow them down a little bit.

ThreadieBusters were bonza down the Daly last week……even on the bigger tides, we found a heap of fish around the Golden Mile and casting snags with these magic plastics worked a treat on the incoming. Below the S bends was too dirty…no surprise coming off the springs.

If you’re after a Jewfish, your odds are pretty damn good. The Shipping Containers off Stokes Hill Wharf held big Jew that loaded up and broke the odd rod this week. Some nice fish to 13kg were landed however….but as always with the wrecks you cant muck about with too much sportsmanship or you will lose.

Mal the Master hit The Vernons again and stumbled across some serious Whale watching! Just off the north west Vernon were a pod of whales breaching the water, some of which was caught on his IPhone. Aside from this, Mal caught GT’s, Quennies, LongTails and Goldies for the day.

Someone has turned the Crab switch off for now…..almost seem to have vanished overnight. Can’t complain too much though…I reckon this year was the best year ever??

Bring on the Barra….the big coastal fish have no excuses now. Don’t miss the boat folks…..

Posted in Fishing Reports | Comments Off on Crank it up, crank it up…… 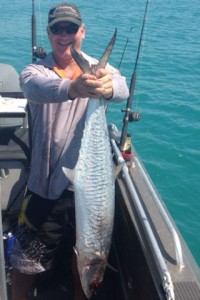 With all this humidity stuff going on you’d think the billabongs would be going off by now, but I’m yet to hear of anything suggesting the flood gates have opened. I’d say the full moon has had a lot to do with that because water temps are definitely up so there’s no excuses other than fish feeding more at night than during the day. Give it a week or so and approach to the new moon should see all guns blazing on the inland scene.

Bluewater however is another story. CFW Staffer Mal Strong shot around to The Vernons this week for some jigging and bottom action as the neaps began to lean out. Mal said the hardest part was getting fish aboard the boat in one piece as the sharks were there in force. Drifting the deep channels found good sized Trickies, Goldies and the odd Spaniard down deep, whereas Smith Reef housed the Pelagic entourage including heaps of Tuna busting up around the boat.

Good reports of Jewfish taking squid baits at night came from Charles Point and Lorna Shoal. Most fish are around the usual 12-13kg mark.

The local standout is still Lee Point for a quick Mackeral assault. This year the tourists have been getting hammered by monster fish, destroying gear, loosing line, leader and even whole combos over the side. They are telling me that some of these macks are the biggest they’ve seen in ten years of annual visits to the territory.

Stokes Hill Wharf proved to be a good land based option last week. Again many fish were lost to the pylons but Queenfish and Trevally were landed following epic battles against the odds.

With water temps all good and coming off the neap, Id say The Daly might be worth a trip late this week. In fact, I might see you there….

Posted in Fishing Reports | Comments Off on Mackerel Mania
«‹456
Top