Take a look at this! Has anybody seen this man before? Yes, of course…it’s the one and only, and very happy Tony Hare, the same one you might have seen spread all over glossy covered magazines of late, with either a Barra, Peacock Bass or Giant Tarpon slung over his shoulder. No matter how hard he tries to tangle with the rest of the world’s exotic fish species, his heart can’t be moved from our very own Barramundi and on this occasion it was done in true territory style! They say you can’t teach an old dog new tricks, but this myth has been BUSTED. With his second home being The Daly River, it’s no wonder he has it sussed. Try 110cm on the fly….sludging around in mud up to his knees at Bamboo Creek he smashed the magic cast just on dusk….an epic catch for this man who has now all but forgotten about a Baitcaster. It was no fluke, he’s now tallied a number of these big fish……I think it’s time I confessed….Tony, YOU ARE THE MAN! Everybody bow.

In other news, maybe the prayers paid off. The Daly is now up around 12 metres and looks set to sit for a little while. Better Late Than Never as they say!

Word is out that we are in for one ballistic Bluewater season, with Sailfish, Tuna and Macks already showing up wide of Dundee and The Perons. The Goldies have been in close too, no doubt as a consequence of a poor start to the wet season, so all in all, things are looking up…no-where near as bad as it might have seemed! Yipppeeeeee!!!!! 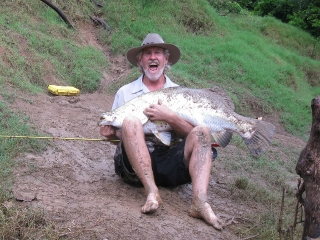