Out n About with Craig’s

Well haven’t my staff been having some fun….Robby’s been Gulping at Bynoe on the Jacks and Longy’s been rippin’ the billabong barras with plenty of success. Despite the big moon, working weedless shads through the sticks at Hardys proved good enough for a dozen barra in the 60’s during the morning session. Small ‘walk the dog’ style lures also tempted fish over the weed beds and those Threadie Busters did their thing up close to the Pandanus clumps. Bigger fish were hooked, but not landed.

Robby had the Gulp 3” Banana Prawn Shrimps working around the Bynoe Rockbars for Jacks, Cod and Barra during the spring tides. These scented Prawns keep proving too good time and time again and there doesn’t seem to be a fish in the sea that doesn’t like ‘em. While Im on about the prawn style lures, you may have heard of Zerek….Wow….aren’t they going off. When the going gets tough, the tough get going and that’s exactly what’s been happnin’ here. Both inland and saltwater fish can’t resist these things and being weedless, you can play some pretty insane games with them and still get them back….more often than not, with a fish wrapped around em!

Landbased fishing around town tested some gear this week. East Point the location and barramundi to 82cm caught on the dropping tide from the rock ledges toward the Ludmilla Creek mouth. Reidys Big B52’s in Gold Bleeding Mullet was the go-to lure on the day so there was no need to go the lighter finesse route.

Lee Point is still producing 8kg Mackies toward the top of the tide, particularly on the springs. One crew caught a number of fish within the two hour session drifting pilly baits mid depth in the current.

Coming off the big springs towards the neaps this week. The weekend is shaping up to be a winner…weather permitting. 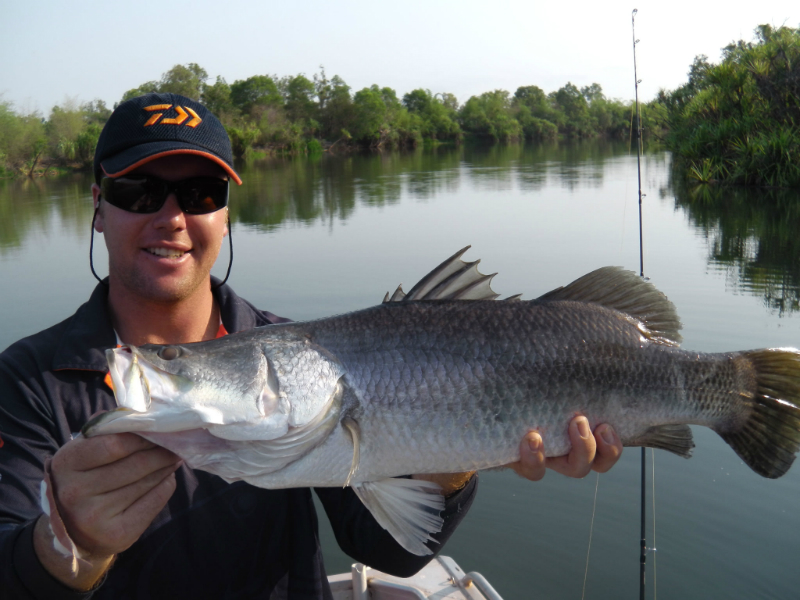