Robby had a shocker…. 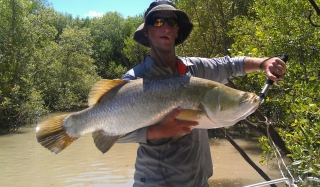 Well you might’ve thought I’d been talking up Robby Rees recently, but don’t be fooled by this image…..this time he’s had a Shoal Bay Shocker…..yep, kissed the sandbar it near on full noise and promptly threw everyone over the side to start pushing. Luckily, they weren’t stuck for long but that didn’t improve the days fishing with only a few small barra coming from the low tide holes for their efforts. In other Shoal Bay news however, fishing was quite good and some big fish were caught. As Rob now says…’You can’t win them all’!

Mal’s reported a few fish from the Bluewater. Jewies have been caught at Charles Point and Middle Arm’s Town Hall Hole on the low tide change. Surprisingly pelagic activity included 10kg Spaniards, plenty of School Macks and the odd Tuna to 8kg from The Vernons and around ‘ol faithful Smith reef.

This week has been big for Goldie reports too. One guy was in the harbour (best I don’t pinpoint it) and he got rattled at night on 60cm Golden Snappers! At the same time, I’ve heard Fenton to be holding some damn big versions also, so that’s always good to hear.

Here’s comes the new moon…yippee! Dunno about you, but I love it….